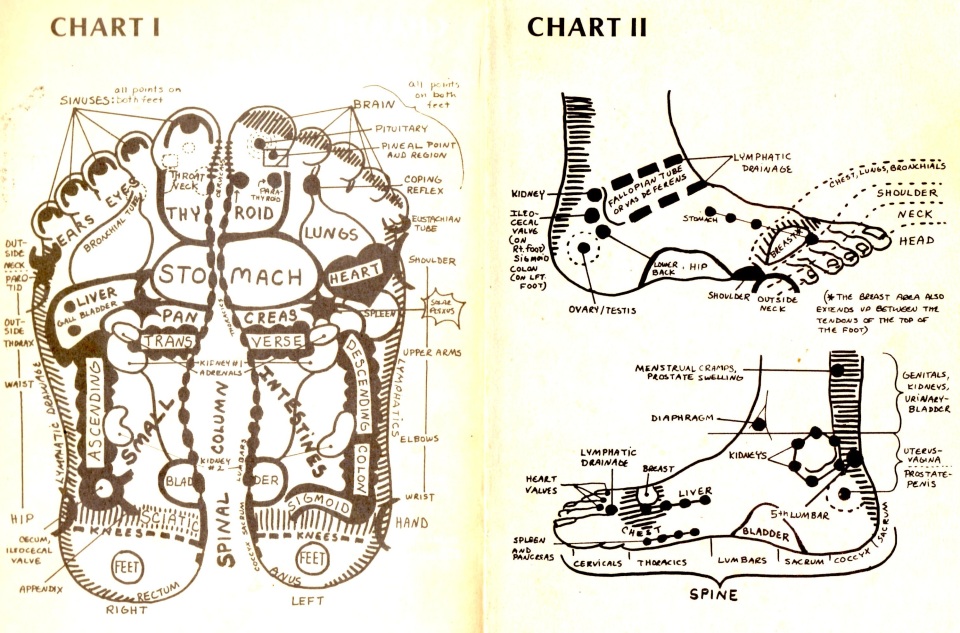 From “The Foot Book: Healing the Body Through Reflexology,” by Devaki Berkson, 1977

Anyone who has a neck has a mind-body connection, assuming the mind is in the brain, which has not been proven.  In fact, with the medical mucky-mucks pontificating about “evidence-based” medicine, I have to ask what evidence do we have that the mind exists at all?  In fact, what evidence do we have that life exists?  We can’t measure either of these on our fancy instruments.

Albert Einstein, who sought in vain for a unified field theory to link the different universal forces, like gravity, and strong and weak nuclear forces, took life for granted, as Western medicine and science do.  Oriental philosophy does somewhat better, with its acceptance of “qi” or “chi,” loosely translated as “life force.”  Philosophically, I prefer the Oriental paradigm, which assumes a living cosmos, emanating from the inside out, like a holograph.  Embryos grow from the inside out, as do plants from seeds.

While people know the brain is in the head, they forget that nerves extend from the brain to almost every cell in the body, in a feedback loop that transmits information and directions back and forth with dazzling complexity.   Chemical messengers and neurotransmitters number in the thousands.   Only a few have been studied, and even these are poorly understood.

The so-called “scientific method,” a construct of the mechanized Western model, assumes cause and effect, yet it requires limiting any “scientific study” to one variable. This creates an artificial situation which attempts to control for confounding factors and leads to skewed results.  Alternatively, the Oriental model, which sees disease, for instance, as a pattern of dis-harmonies, is inclusive.  It presumes there are no single causes and that dis-harmonies create patterns of dis-equilibrium. Disciplines like acupuncture strive to re-balance “qi” to improve health and quality of life.

Ear acupuncture and reflexology are based on the idea that there are correspondences between points on the ears, hands, and feet and the various organs and structures in the body. 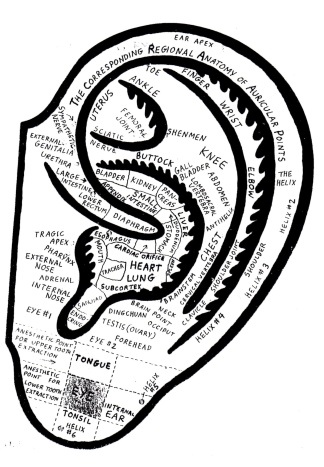 Acupuncture does not lend itself to the “scientific method.”  Because it is holistic, it cannot be reduced to “cause and effect” studies.  Also, studies into acupuncture can’t be double-blinded, as the acupuncturist presumably knows which points are the “real ones.”

However, as East and West develop more ties, acupuncture is receiving more attention and acceptance, especially for such conditions as pain and substance abuse.

Reflexology, which is a specific form of massage, does not get as much attention, but it has the advantage that anyone can do it.  I make no claims about its healing properties, but I can vouch for the fact that foot and hand massage feel good and constitute a safe form of touching in a skin-starved society.

6 thoughts on “The Mind-Body Connection”