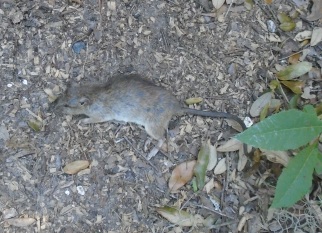 I am a murderer.  In defiance of my lifelong aversion to killing–war, capital punishment, abortion for me or by me (others have their own choices to make), physician-assisted suicide–I starved a rat this week by trapping him in the pantry.  I had already protected my edibles in a large metal trash can, because of the rat/mouse infestation that has plagued me for more than a year.

I’m the type of person who apologizes to blood-sucking mosquitoes before swatting them, but I’m absolutely opposed to the government spraying the marsh with malathion to kill mosquitoes at large, or the farming industry spreading pesticides willy-nilly over farmland.

I eat so little meat that I might as well be a vegetarian.  I like bacon but couldn’t kill a hog, even if I knew how, so that makes me a hypocrite. I have been known  to kill shrimp.  Blue crabs, too, but they are too much work to eat. Fish?  I’d rather not and don’t know how to fish.  Since I got chickens eight years ago, I have not eaten chicken.  I wonder these days how many people have even seen a live chicken, and if they had, could they kill and eat them?

S. Squire Rooster, Attorney, for the Law of the Land

As methods of murder go, poison exists in the same category as bombs, because they are generally non-specific.  I actually bought poison to control the rodents but took it back.  My intention was to feed the river with rat remains, thereby alleviating my guilt, but poison would have made that rat’s body dangerous for the wildlife I like.  Traps are messy, unreliable and non-specific, too. I have a cat and rooster to protect.  The main reason I have rats is because my rooster, Squire, lives in the house and the cat lives outside.  Rats really like chicken food, I discovered, especially sunflower seeds, and they leave husks, shreds of clothing, mouse turds, and urine wherever they go.

In the past couple of years, rats have eaten through refrigerator wiring, a washing machine drain hose, sofa bedding, clothes, walls, packages of food, drapes, and even through a hard plastic cat food container.  They have taken up residence behind the stove and eaten through and urinated on the insulation at the bottom.  Like the human rats in government, I’ve learned that if there is something you have that they want, they will find a way to get it or destroy it, and leave the stink behind. 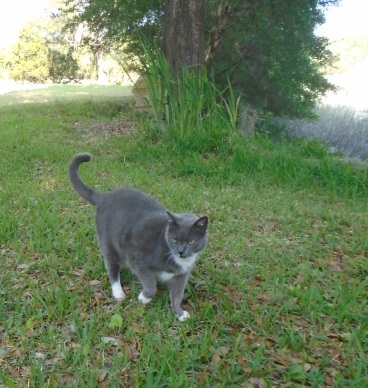 Rat stink was making me sick, I decided, and cleaning up after them was pushing me to re-evaluate my excessively high moral standards.  I had visions of getting hemorrhagic fever from rat urine, bubonic plague from rat fleas, death by asphyxiation.  I bribed and threatened my cat, who watched the rats while they ate her food, then moved outdoors and refused to come back in.

I looked into getting a rat snake.  I discovered the Georgia Department of Natural Resources has outlawed selling native snakes. (The DNR is another blog, another day.) The local reptile dealer says he could be fined $20,000 and shut down if he sold one.

I prayed for a rat snake, and about two months ago, a black kingsnake dropped from heaven (actually out of the attic when I let the stairs down). He may be a cotton mouth moccasin, but he disappeared behind book shelves before I could fully identify him.   He didn’t reappear until my birthday in August, then showed briefly on the bathroom floor that night.  I almost stepped on him, but as before, he began to charge at me then disappeared again behind a cabinet, not to be seen again.  I saw traces of rat-blood on the floor and was grateful for the surprise birthday present. 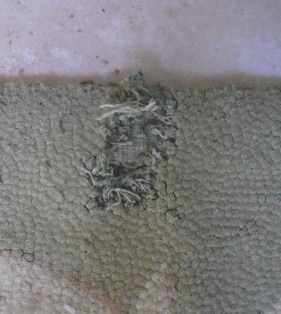 It took that rat about six days to starve to death while I deliberated about what to do.  The pantry became death row when I discovered a new three-inch hole, made by one of his friends, in a favorite antique wool rug. This sealed his fate, a scapegoat for my pent-up rage. I checked in on the prisoner every day or so, and usually didn’t see him.  The day before he died, or maybe the day he died, he was sniffing around the bottom of the door and seemed weak.  When I opened the door Tuesday and smelled dead animal, I knew he was gone.  I searched and found him inside an open box of plastic garbage bags, looking as though he were sleeping peacefully.  That was comforting, in a macabre way.  I took him outside and showed him to Socksie the cat.  She took a couple of whiffs and walked away.  I deposited him by river’s edge, and Wednesday morning he was gone.  I figure a racoon got him, thereby concluding the latest of my many scientific experiments on human and animal behavior.