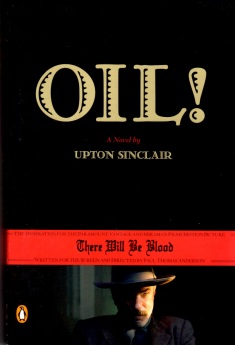 Tracking history through personal time shows how my interests evolve.  In January, 2008, I was reading Oil! by Upton Sinclair, the 1926 novel he wrote about the oil industry.

In January, 2018, ten years later, I have read the biography of John D. Rockefeller, Sr., Titan, by Ron Chernow, published in 1998.  This book goes into detail about Rockefeller’s childhood, personal life, his creation of Standard Oil and business methods, retirement, and philanthropies.  It gives short character sketches of most of the people associated with Rockefeller.  It makes an attempt to reconcile the strange mixture of rapacious greed and Baptist charity that coexisted in the man.

I didn’t know it then, but the novel Oil! was probably based on the true story of Standard Oil and the way it destroyed, compromised, or bought out its competitors.  The monopoly was dissolved in 1911 when the US Supreme Court found Standard Oil in violation of the Sherman Antitrust Act.  Chief Justice Edward White gave the company six months to spin off its 33 subsidiaries.

If the purpose of breaking up Standard Oil was to destroy the monopoly and allow for competition, the plan backfired.  The same insiders controlled stock in all the subsidiaries, Chernow notes, and in the decade after the decision, the total value of the assets quintupled.  Rockefeller, who had a quarter of the stock in the parent company, and received the same amount of stock in all the subsidiaries, went from being a mere millionaire to a having net worth of  $900 million, and thus became the richest man on the planet.

Also in the past year, I have been reading about the divestiture of fossil fuel stocks from a number of pension plans in various countries, including the US and UK.  The Norwegian central bank has recommended similar divestiture from its sovereign wealth fund to avoid too much dependence on oil in its portfolio.

This leads me to believe the industrial age, with its over-reliance on fossil fuels, specifically oil, has peaked, and we are on the path to some new paradigms regarding energy and its use.  I’ve speculated about what sells oil and realized war, international shipping, airplanes, plastics, trucks and automobiles provide some of the largest markets.  In other words, the “global economy” depends heavily on oil and will for the foreseeable future.

To reduce dependence on fossil fuels requires a longer and broader perspective than we have considered so far.   The drum beat for “growth” and “progress,” and for the “global economy,” American dominance, and “jobs,” presumes a continuation along the paths we have taken so far, yet they have led to world-wide malaise, toxicity, and conflict.  Will more of the same be better?

The US dollar lost 95% of its value between 1913, when the Federal Reserve Act was passed, and 2010.  More money isn’t necessarily better, and it leads me to wonder if the frenzy over money, from individual to international levels, misses the crucial issues.  They say money doesn’t buy happiness, but worry over money buys only pain.  They also say money is a symbol for energy, but energy blocked or misdirected, like money, festers and ultimately damages the host. Is more energy better, if it causes destruction?

Oil is the new gold, in today’s economy.  Oil may be more useful than gold, but the way it is used leads me to question whether we are wasting or misspending our energy and resources to acquire only excess, pollution, and trouble.

Oil has become so integral to our 21st century lives that it’s hard to imagine life without it. It’s also hard to imagine the pristine conditions the planet enjoyed before humanity started extracting that gooey black stuff from under the ground and spewing its spent components in the air, dumping it in the water, and spreading it over the land.

Does “the economy” really need to grow, or does it need to retract a little and engage in some self-reflection, to appreciate and make better use of what we have?  Will the “growth jobs” of the future concern themselves with cleaning up the ocean gyres, planting trees, and making re-usable shopping bags?  Are American citizens and taxpayers under any real obligation to support wasteful government mis-spending of empty money that rightfully belongs to the unborn?

Anyone who supports return to a healthy planet should consider how our national policies create artificial markets for fossil fuels, global warming, and planetary suicide.