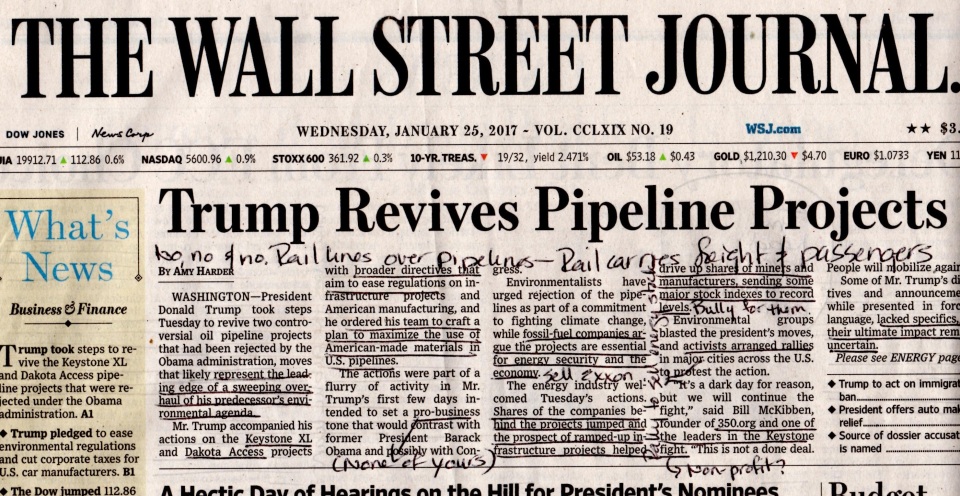 On January 25, The Wall Street Journal ran a front page article claiming “Trump Revives Pipeline Projects.” The article states that President Trump gave a thumbs up to the Keystone XL and Dakota Access pipelines, both stalled by former President Obama.

The WSJ is all for this, as noted in its editorial “No More Keystone Capers” the same day, which asserted the Keystone XL and Dakota Access pipelines are good for “the economy.”

The WSJ says those in the industry are divided about whether the pipelines are needed.  Some say they are not needed yet. Other sources indicate energy use is declining worldwide, there is a glut of oil, and prices are down.

The WSJ’s slant is well known.  It supports Wall Street, assuming that what’s good for big business is good for the country.  It glosses over the long term costs of large-scale industrialization, manufacturing and exporting of natural resources.  The cost effectiveness of pipelines (and other large projects that benefit big business at the expense of residents) rides on the use of “eminent domain,” the government’s self-proclaimed right to confiscate private land for public purposes.

The Dakota Access pipeline is at the hub of the Standing Rock Sioux’s protest against the US government.  The Sioux claim the pipeline, slated to run under the Missouri River, endangers sacred ancestral and hunting grounds, as well as their drinking water supply (and that of others downstream).  Their resistance has drawn support from other Native American tribes, numerous environmental, other land-friendly and taxpayer-friendly groups.  The group is staking out its territory through the winter, justifiably worried that bulldozers will move in as soon as protesters look the other way.

While eminent domain has been in use over a century, it got a jump start forward in June, 2005, with the infamous “Kelo decision,” in which the Supreme Court voted 5-4 to allow the New London, Connecticut City Council to eminent domain Susette Kelo’s neighborhood to build a convention center.  Pfizer, the massive pharmaceutical company, was a heavy hitter behind the move, as it had promised to build a $270 million research facility next door.

It was a bitter fight, as several of the neighbors had lived in their homes in the Fort Trumbull area for close to 60 years, paying property taxes all that time.  After the Supreme Court decision, Kelo’s neighborhood was razed.  Four years later, when Pfizer’s tax credits expired, it announced that it was abandoning the project, not to return.

Meanwhile, the precedent-setting decision by the Supreme Court has had devastating consequences, including using eminent domain to condemn property for oil pipeline construction.  It reaches deep into the pockets of all property owners and taxpayers and raises questions about what, exactly, is guaranteed by land ownership.

Shortly after the Kelo decision, there was a stampede by municipalities and other government entities across the nation to confiscate private land on the flimsiest of pretexts.  It got so bad in Georgia (and over 40 other states) that the state legislature put brakes on it, much to the dismay of our city and county governments.

In Savannah, title searches were being conducted by city officials to determine which properties the city might claim.  It was irrelevant to them that property taxes were being paid.  Now municipalities are lobbying the state legislature to remove the limits and maybe expand them, too.

Worse, eminent domain is rearing its ugly head in ever more ominous guises.  President Trump has said he would like to expand the its use.

This power of the state to confiscate private land for corporate cartels has run amok.  In Georgia, the latest assault on private property comes from corporate giant Kinder Morgan (of Enron heritage), which is lobbying the Georgia government for direct eminent domain rights.  There is a newly formed legislative committee studying how to slip this egregious theft past taxpayers and still get re-elected.

I contend the industrial age has peaked.  Long term costs, like widespread contamination of shared resources, are becoming increasingly apparent, yet these are not factored into the government or corporate prognostications.  The “global economy” works when you’re talking about electronic money.  It’s a different matter when you’re exporting valuable natural resources and leaving the waste behind.

Eminent domain cuts both ways.  The impact of the Kelo decision has been for government to determine what is in the interests of “the public good,” to the great indignation of “the public.”  Remember that property owners pay property taxes every year to secure their protection from land confiscation, among other things. Guarantees such as water quality come with property tax payments.

By comparison, in the mid 1800s, much of the US rail system was built on government granted land, acquired by the government by “treaty” with natives, ”purchased,” as in the Louisiana Purchase, or presumed US territory because no one contested it.  Abraham Lincoln and his successors, such as Andrew Johnson and Ulysses Grant, gave 10-mile wide swaths to private rail companies.  During the War Between the States and during Reconstruction, the North was desperate to insure a food supply for the cities, since it had eviscerated the South’s agricultural economy.  Let’s not forget that Abraham Lincoln was a corporate railroad lawyer before he was president.

So the race to link the continent’s coasts as quickly as possible gave rise to government bonds and favors, and railroad stock speculation, with the so-called “Robber Barons” like John D. Rockefeller, J.P. Morgan, and Andrew Carnegie playing both ends against the middle and profiting on all sides.   They skillfully manipulated the government and stock markets to do their bidding, at maximum public cost.

Immigrants from China, Ireland, and other places were tricked into leaving their homes to come to the “land of the free” to do the grunt and dangerous work, like laying the tracks.  They were now destitute, unable to return home, and forced to do maximum labor for minimum wages and the worst possible living conditions.

Back to the 21st century, the most outrageous difference between the rail and the highway systems now is that the highways are owned by the public, and the rail lines are owned by corporate rail giants, like Norfolk-Southern, CSX, and Western Pacific.

To allow the rail infrastructure—an invaluable public resource–to languish in corporate hands distorts US perceptions so badly that we lose track of the obvious.  Rail is the most efficient, enjoyable, and effective land transporter of goods and people ever devised.  Rail has versatility, accessibility, and practicality that pipelines can never provide.  It’s out in the open, so people can see what’s broke and fix it easily.  Best of all, the infrastructure is already in place, just needs a little of The Donald’s magic wand in terms of claiming it for the public good and using some of that infrastructure funding to spiff it up and make it safe for all.

If the new President wants to use eminent domain for the public good, he would do well to look at the rail system, but don’t expect him to think of this on his own.  It is in every citizen/taxpayer’s best interest to look at who benefits from eminent domain as it is currently wielded.  Once again, it favors large institutions over individual taxpayers, while taxpayers suffer the costs.

And now the world knows my solution to the pipeline problem.

Coming soon . . . my solution to the health care problem.