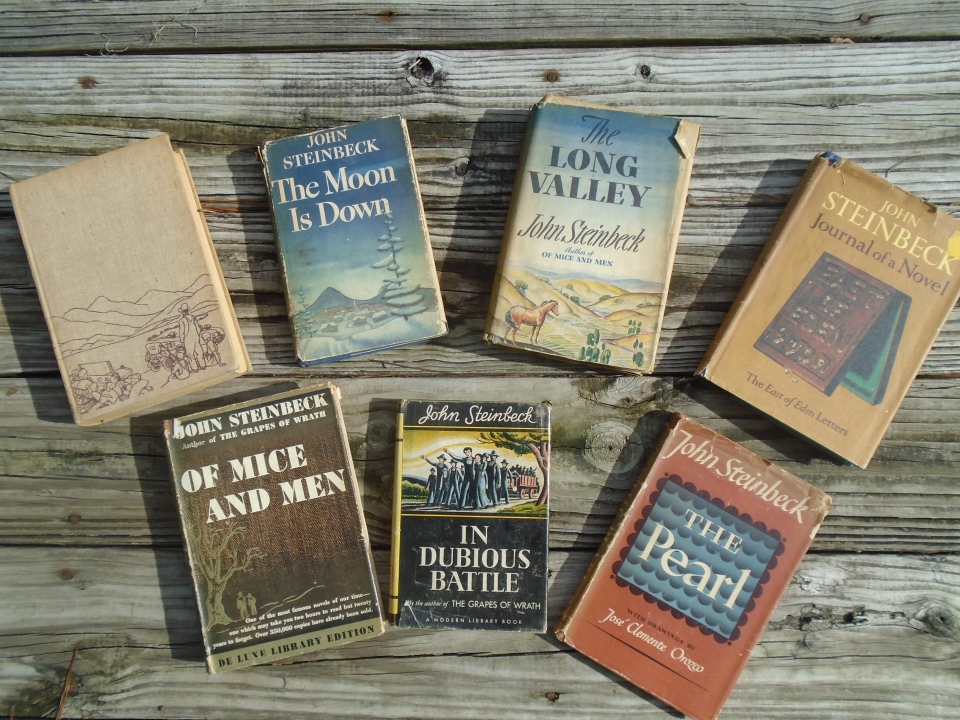 I read John Steinbeck’s In Dubious Battle this week.  This 1936 novel about labor organizers among apple pickers is believed to be the prelude to Steinbeck’s 1940 Pulitzer Prize winning The Grapes of Wrath.

In Dubious Battle is one of several Steinbeck books that my mother collected before her marriage.  Mama was a would-be novelist who never wrote.  I never even saw her read a novel, but her collection of 1930s, 1940s, and 1950s books showed she read fiction in her younger days.

My mother, who was a self-described “lunatic fringe, radical right-wing extremist,” was a member at one point of the John Birch Society.  She was–like many of her Depression-spawned generation–terrified of Communism.  John Steinbeck, who was an admitted Communist sympathizer, was suspect because of it.

In Dubious Battle opens with a man, John Nolan, moving out of his paid-for, rented room a week early, telling his landlady he is taking a new job and doesn’t know where it will lead him.  He ends up joining with Mac, a Party (although Communism is never specifically claimed) organizer, to incite apple pickers to strike for promised wages.  Before they traveled, the migrant pickers had been promised double what the growers were now willing to pay.

The novel proceeds to describe the organization Mac directed to help the strikers win promised wages.  The growers are heavily organized and have the sheriff and vigilantes on their side. Mac believes the strikers will have to fight to achieve their ends, but the men are afraid of the bosses and reluctant to challenge the opposing side’s guns.

Steinbeck, as usual, tells a gripping story in short, easy-to-read sentences.  His characters are streamlined but pack a powerful punch.  The denouement is chilling but typical of Steinbeck’s style.

I read thinking how little we’ve changed since then.  Today’s resentment toward immigrants is much like yesterday’s prejudice against migrant workers.  Sympathy ran with the perpetrators of injustice, who could buy, con, bribe, threaten, or force their way. Sigmund Freud called it “identification with the aggressor,” those who become what they hate in order to win. It struck me as irrational that the owners would prefer to throw apples away to increase prices than to pay their pickers a living wage, so they could afford to buy the apples they picked.

In Dubious Battle reminds me of Studs Terkel’s nonfiction work about the Depression, Hard Times.  Terkel mentioned, too, that the corporations were pouring milk into sewers and slaughtering piglets to increase prices, while babies were starving and dying of rickets.

Steinbeck’s purpose, through the organizer Mac, was to teach the strikers to work together.  He did it through the Party, but the cooperative idea transcends politics.  To organize for a common cause makes sense, but in In Dubious Battle, we see the owners had a stronger common cause than the workers.  That they aligned along the lines of injustice and immorality pave the way for movements like Communism, which promises to right the wrong but fails through its methods of force and deceit.