I got up before daylight this morning and took coffee to the porch.  There was a light drizzle, and gusty breezes sang through the trees.  I snuggled in winter bathrobe–thankful that mid-nineties summer heat has finally eased off–and let mind wander, guided by the rhythms of live oak branches and leaves dancing in the wind.

Otherwise, all was quiet, no machine noise, and only sporadic crows of the roosters.  They seek reassurance, back and forth.  I answer with my translations.  To Squire’s five-note crow, I respond, “I love you so much!”  To Speckles two notes I sing “You, too!  Go back to sleep.”  And they do.

Silence again, but for the rustling crackle of oak leaves in the waves of wind.  For 20 minutes, I watch the sky lightening, as shades of gray transition into tones of green and blue.   Rain slackens.  Then the primal screams begin again.  This time, Speckles wakens the crows in the trees, who cackle an annoyed reply.  Squire answers once, then all is quiet again, but for the breeze and the drip, drip, drip of rain petering out. 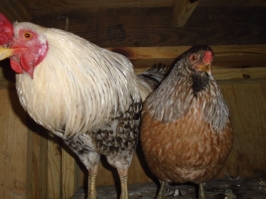 I think about how this weather is my favorite, cool but not cold, and breezy, lifting thoughts and carrying them wherever the wind blows.  Absent human noise, even the birds still sleeping.

The roosters set my daily clock.  Their morning greetings are like love songs to the rising sun.  I sing back in human words, believing that my intent to greet the day joyfully, in harmony with nature herself, carries far and wide, inspiring the dreams of those still sleeping.

Suddenly a gust of wind blows the rug across the porch and over my potted herbs.  A moment of panic startles me out of reverie.  Memories of hurricane Hermine, only a week and a half ago, merge with memories of the garden spider that succumbed to the storm’s high-velocity blasts.  As the storm moved in, I saw the spider struggling at the web’s anchor on the asparagus fern, looking panicked.  A  large twig attached to Spanish moss had blown into her web, ripping it apart.  My heart went out to her, but what could I do?  I had the chance to say good bye, because I knew she had little chance to survive the blasts of wind, this late in the season.  The next day, I could find no evidence or trace of her body.  Only the moss-covered twig, swinging on the strong web anchor from above, proved she ever lived.

I have watched that spider all summer.  She moved her web three times, after I kept bumping into it on the porch.  Finally, the web stretched from the fern on the porch to a low-hanging branch of the live oak tree, out of my way and over my head.  The huge spider was easy to see, with body at least two inches long and legs another three inches.

The storm also broke the top half of a banana tree that had a rack of green bananas.  I had dearly hoped these bananas would have a chance to ripen before the first frost.  My garden this year was a miserable failure, but the bananas showed some promise, for the first time in over ten years of trying.

Storm Hermine threw branches and moss all over the yard and knocked out power and water for 48 hours, but the spider’s struggles and disappearance remain my most poignant memory of the storm’s passage.

This morning, as the dawn broke, I noted the moss and twig swaying in the breeze, and thought about how everything runs its course.  That oak tree may be over 100 years old, but garden spiders live only a season.  My three chickens are five years old and have a projected life span of not much longer.  They keep me focused in the moment, with more vitality packed into five pounds of feathers and mouth than any creatures I’ve ever known.

At 7 a.m., the roosters start crowing in earnest, and my quiet time ends with the primal rooster message: