Wars have historically accounted for the largest overhead and subsequent debt in this nation’s history.  Each war renders us less free, and the taxation that results is like a whip across the backs of already burdened taxpayers.

Economists are busy predicting the future they want, but they can’t hide the reality of street-wise individuals whose disposable income is their bottom line.  The bite of excise taxes on the basics–like certain foods, energy, telephone, gasoline–is disproportionately higher on those whose incomes are lowest, so they are first to feel the pinch.  This is the population that becomes desperate enough to deal drugs, work under the table, break into homes, and take other crisis-mode measures to survive.  Drug laws make the black market profitable, without the bother of background checks, drug screens, employer references, and other rules that limit legitimate employment options.  While there may be exceptions, those who now crowd our prisons consist largely of people whose lives are chronically dysfunctional rather than evil.

Society has let them down by not equipping them for survival in a civilized context.  Beginning with elementary school, they are not encouraged to try.  They are allowed to slide by on substandard work until they fall farther and farther behind.  As the distance grows, the child gravitates more towards others like him, those who have no appropriate role models at home or at school.

They often become the casualties of another war, the “War on Drugs.”  The International Centre for Prison Studies (also on filipspagnoli.wordpress.com) blames the War on Drugs and the “Three strikes you’re out” federal policies for the fact that incarcerations have quintupled in the US since the early 1970s.  The United States, with 0.07 percent of its population in jail or prisons, incarcerates more citizens than the top 35 European countries combined.  Forty percent of inmates are black, and 25% are non-violent drug offenders.

Once in prison, these kids, now adolescents and adults, still get no basic skills training.  Nothing is expected of them in prison, either.  Any meaningful activity, education, or work is withheld from them, except in the most token format, so there is no opportunity in prison to re-tool their lives to live differently on release.

Society does itself a disservice by allowing this to happen.  The oversight costs much more than money.  From the prisoner’s perspective, housing and food—two of his biggest expenses on the outside—are covered by his confinement, so theoretically, he might be able to focus on education or training . . . perhaps for the first time in his life.  If society made basic skills, useful work (within reason), or other productivity a part of prison life, it would make more effective use of its taxpayer dollar both in terms of paying current incarceration costs and preventing crime on the streets.

The push to build more prisons is based on this lose-lose scenario that prioritizes punishment over rehabilitation.  That’s why crime escalates to fill the available space, but recidivism accounts for a significant percentage of the prison population.

Our jails and prisons have become substitute housing for the homeless.  As “blighted neighborhoods” are replaced by “revitalized areas,” more displaced indigents will find their way to prison, down one path or another, because they have nowhere else to go. 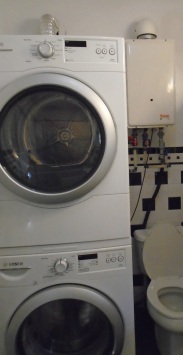 It occurred to me yesterday that money hoarding and information hoarding go together.  Information hoarding is most obvious in the patent industry.  This translates into mass confusion at the grassroots level, where multiple companies compete on the same turf for “market share.”

My new bathroom faucet provides the most recent example of this dysfunctionality.  Home Depot supplies only one brand of faucet, and the bottom of the line (read “simplest”) faucet only comes in one color, an off-color, “polished nickel,” so doesn’t match my formerly standard chrome.  In the 20 years since I bought the old faucet, the metal to plastic ratio has declined maybe 50%.  The drain pipe, pivot nut, and strap are now plastic.  I only needed the new faucet because the plastic gears inside both handles on the old one broke.

Plastic gears, plastic joints, and plastic moving parts have replaced metal in an across-the-board move that creates enormous waste and is dangerous, to boot.  I’m thinking of the aluminum lawn chair that snapped without warning because of the plastic joints.  Plastic, unlike metal or wood, is unfixable, so the entire product must be discarded.

Back to the faucet:  I considered substituting the old metal drain pipe for the new plastic one, but found that male and female ends had been reversed.

Why?  I have to wonder if patents have replaced standardized parts in our universalized conveniences.

Who benefits from this subtle downgrading of standard household equipment?  Certainly not the homeowner, who has not only the expense but the inconvenience of replacing equipment that should have lasted much longer.  Faucets installed all over town in the early 1900s are still functional.   While somewhat corroded and rusty on the outside, they still work as well as ever.

This isolated example would be a minor problem, except that every new replacement product I buy is worse than the old one.  Why did I even have to buy a new one?

“We can’t get parts,” is the standard answer.  When I suggest that digital controls on everything from my propane gas stove, dryer, and tankless water heater, to microwave–and even coffee percolator–add unnecessary levels of complexity and increase electrical and repair costs, people look at me as though I’m the crazy one.

Why, in an age when we claim to want to reduce energy waste, are we being maneuvered into untenable situations like this?  My desire to free myself from the grid and Southern Company’s monopoly is blocked at every turn by corporate desperation to keep me hooked into a system that bleeds individuals like me dry.

And they wonder why the economy is imploding?

*The Waste Makers, by Vance Packard, (1963) which I read in the 1970s, made a profound and enduring impression.  I skimmed through it while writing this blog and see that Packard’s observations are even more apparent today.  It should be required reading in every high school.

**Total cost of replacing the Frigidaire stove’s digital control panel was $115. (The replacement part was $82).