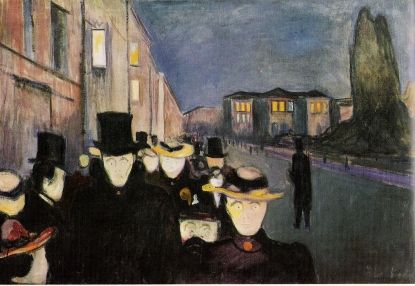 It is sometimes said that money is a form of energy, but it may be more appropriate to suggest that money is a symbol of vitality, or life energy.  In theory, this is the “means of production” that Karl Marx said defines capitalism.

“Capitalism” has become a sinister term in some circles, but I wonder if the term has been commandeered not by the individuals who provide the vital force that keeps “the economy” functional, but by the aggregators of human capital under institutional umbrellas.

Some claim Adam Smith, who wrote The Wealth of Nations in 1776, is the “father of modern capitalism,” but Smith never mentions the word “capitalism” in his book.  He refers a lot to “capital” and to “stocks,” without defining either term.  For a lay reader, The Wealth of Nations is tedious reading, and it comes across as a tax collector’s bible.  Smith states up front that “the late war,” which he never pinpoints, but is probably the Seven-Years War (the French and Indian War in North America) was exceedingly expensive, and the UK went into a lot of debt to pay for it.  The Wealth of Nations, which supposedly supported “free trade” also supported military protection of UK commercial interests in foreign ports and foreign trade, because it was easier to tax.  “The colonies” were great sources of raw materials, and because Britain had a monopoly on trade with its colonies, it and British investors could buy tobacco and lumber, for instance, and sell at a huge profit.  Smith tells us that growing tobacco in France was illegal, because it was too hard to tax domestic products.

Another striking feature of Smith’s book was that it was so cold-blooded regarding the value of labor.  Labor should be paid enough to raise four children, because statistically, two die before reaching majority, and the parents need to replace themselves. Rents should be as high as the tenant can afford.  Farmers are lazy because they do a variety of different things, whereas factory workers do the same thing all day and are more efficient.  He refers to the “idle” without defining them, but when he says the “idle” will spend gold to buy exotic birds and fish from remote lands, where bank-issued currency is not accepted, it becomes clear that the “idle” are rich rather than poor, and possibly associated with the court and the aristocracy.   He also noted government jobs are greatly coveted, because of the security and “perks” they provide.

It is therefore not surprising that Smith’s book was so popular that its author was appointed Customs Commissioner of Edinburgh after it was published.

When Karl Marx defined “capitalism,” as the “ownership” of the “means of production,” he didn’t specify what the “means of production” was.  It was assumed to be the machines or the land from which salable items were produced.  But nothing is produced without human effort, which leads to the idea that the “means” is the human labor itself.   “Ownership” thereof is either explicit, as in slavery, or implied, as in employment by the aggregator of human capital under a larger umbrella.

The intrinsic value of human capital has never been fully appreciated.  Both Ayn Rand and Milton Friedman mentioned human capital, but neither took the idea far enough to assert that only individuals can be “capitalists” in the purest sense of the word.  Human beings, by their individual efforts provide the means, through the application of their vitality, to produce commercial goods.  This is what translates into money, the tangible result of the applied effort.

This may sound like a petty point, but it has far-reaching ramifications.  In the United States, it is said that all taxes ultimately fall on the individual.  This means that the individual in this country is supporting taxes imposed by federal, state, county, and sometimes city governments, and is expected to obey laws enacted by all four levels of government.

The system is a hierarchical, patriarchal one of “government over the people” that was set up intentionally by an elite group of landowners, lawyers, businessmen, bankers, and other conspirators who met in secret, locked in a room in Philadelphia for three months, drafted the US Constitution, and by-passed state legislatures to have it ratified by special assemblies.  Thomas Jefferson and John Adams, who are considered among the “founding fathers,” were both out of the country at the time.  Thomas Jefferson was appointed Secretary of State and approved by the Senate without his knowledge or consent.

Alexander Hamilton, who was an ideological protégé of Adam Smith and a British subject, was New York’s only standing delegate to what became known as the Constitutional Convention.  Suffice to say that he had a heavy hand in the drafting, forming strong alliances with George Washington and James Madison, and was probably instrumental in insuring certain provisions, including federal control of all “economic narrows,” such as roads, waterways, the postal service, coastlines, money, patents and copyrights.  Ultimately, the Constitution is an economic document that assumes all taxpayers are federal government property.  Undoubtedly, Hamilton made sure the federal government could assume debt, because as Treasury Secretary later, he pushed through the first tariff, the Hamilton Tariff Act of 1789, and the whiskey tax in 1791.  The whiskey tax was in advance of his creating the first US central bank.  Stock shares in this bank and the Bank of New York, which Hamilton had previously started, were among the first stocks traded in what would become the New York Stock Exchange.

So all the hype US citizens and taxpayers have been sold all these years about “freedom” and “democracy,” and “capitalism” and all the noble values people assume the “founders” intended, are the result of masterful marketing, a talent now well developed by New York’s Madison Avenue.  The bottom line is the US is and always has been an economic machine in the tradition of British imperialism.

So this “government-over-the-people” mentality has been carefully cultivated over the US’ 245 year history, based on this implicit notion that everyone must work to support “the economy,” which is an amalgamation of the federal bureaucracy in Washington DC, Wall Street, the bankers—and of course the military– but it is a perverse, upside down system that is now collapsing from its own weight.

The undervalued human capital that has been conscripted and seduced into this arrangement is catching on, resentful and angry at the betrayal of those whose version of “protection” translates into higher and more painful costs and increasing restriction of individual freedom.  The hoi polloi are not “rising up,” as the revolutionaries might wish.  Instead, they are “beaten down,” giving up, flunking out, doing drugs, both legal and illegal, going bankrupt, committing suicide in shockingly increasing rates, getting sick and tired of the stresses and strains in living in such a “wealthy” society.

While the nation and world are increasingly “de-vitalized” by the expectations and hoops that the “ruling class” have set for them, the human capital that churns the wheel is getting crushed under it.

The idea of  “capitalism” has been twisted and perverted into its opposite by those who would enslave the “human capital,” the vital life forces that provide not only the “means” of production but are also the purchasers of the goods produced.

The healthiest and most vital people may or may not have money, but they excel at self-determination because they only answer to the wealth between their ears.   These are the “capitalists” we can respect and emulate.

3 thoughts on “Vitality and Human Capital”