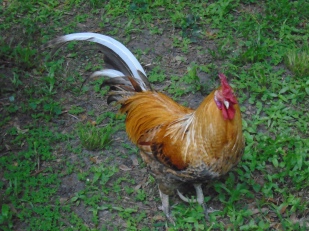 The Center for Disease Prevention (CDC) is raising national alarms about salmonella in backyard flocks of chickens.  It advises a washing hands every time you touch your chickens, and not keeping them in your house or around food.  The CDC goes beyond reasonable with some of its other recommendations, suggesting the bureaucrats who wrote the guidelines know nothing about keeping live chickens.  Salmonellosis is generally a self-limited case of diarrhea that lasts from four to seven days without complications, except in special cases.  Pig ears that are used as dog chew toys are also suspected.

This flies all over me, because the CDC meanwhile is advertising measles vaccines for children, within the same Yahoo article.  The CDC website at https://www.cdc.gov/salmonella/backyardpoultry-05-19/index.html gives the CDC’s version of the salmonella story.

I know something about chickens, having kept them for over 11 years, and I know something about salmonella, having gone to medical school, where I learned it is rampant in the environment.  My medical texts say there are over 1000 strains of salmonella.  It says “salmonellosis” is caused by inadequately cooked food, especially meat, poultry, and eggs.  Fruits and vegetables which are fertilized with animal manure are also implicated.  What the medical texts say that the government agencies don’t tell you, is that processed food is also a source, because the bacteria survives drying.  Incidentally, a dried taco seasoning distributed by Walmart and others has recently been recalled because it is suspected of containing salmonella-contaminated cumin, a spice.

I’ve also been tracking the FDA and its food scares since the E. coli in the spinach scare in 2006.  E. coli usually is considered “normal flora,” in the human gut and aids in digestion.  It only becomes pathological when natural barriers break down.  Antibiotic therapy, which is widely used, not only in human but in animal diseases and as a preventative, wipes out bacteria indiscriminately, but it never completely eliminates the pathogens, giving rise to antibiotic-resistant strains that then proliferate, with nothing able to curb them.  That’s why hospital germs are the most dangerous of all.  Methacillin-resistant Staphlococcus aureus (MRSA) is a universally recognized strain of Staph aureus that requires extreme measures to control, and it can be fatal.

Meanwhile, the CDC is busy promoting the measles vaccine, as a new “epidemic” of measles is sweeping he world, with pockets of outbreaks, we are told, among un-vaccinated children.  The controversy over vaccines comes in tandem with the explosion of patented, prescription vaccines for everything from flu to Zika virus, but the controversy is political, not medical or scientific.  While the medical or scientific institutions take pro-or-con stands, there is little in the news or from “educated” sources giving both pros and cons, and few (maybe none) who understand or want to understand the larger picture.  Or, it may be too early to tell what the ramifications are.

We are all caught in context, and predictions abound, but the past gives more information because we have a sense of the outcomes.  The bubonic plague, which wiped out a third of Europe in the 1340s and 1350s, was blamed on God’s wrath and witchcraft back then, but was later discovered to be carried by fleas on the rats that infested the cities and ships.  We still have rats and fleas, but we don’t hear much about bubonic plague anymore, partly because sanitation and nutrition have improved and partly because centuries if exposure have produced varying degrees of resistance.  Even HIV, which was identified in 1983, has evolved from carrying a quick death sentence to becoming more of a chronic disease.  While the advances of modern medicine have contributed to the long-term survival of HIV and AIDS patients, it’s also possible that the disease itself goes through cycles of infectivity and potency.

The media publishes federal agency press releases as though they are news stories, without question, investigation, or suspicion that they are anything less than gospel.  But federal agencies like the CDC and FDA are increasingly guilty of “boundary creep” by taking on more and greater advocacy roles for patented vaccines and other drugs, or alternatively, against small, independent food producers.  In the years I’ve been monitoring the FDA, it has initiated food scares over spinach, peanuts, eggs, cantaloupes, poultry, and pet foods, to name a few, yet while the scares make national news, precipitate food recalls, and have forced some companies into bankruptcy, the scares generally are hyped-up bluster over limited illness and almost no mortality.

About this salmonella outbreak that has killed two people and hospitalized over 122 in multiple states so far, any discriminating reader, especially one with a medical background, might naturally question how the CDC arrived at this reported chain of events.  How did they know the salmonella outbreak was “caused” by chickens or pig ears?  How do they know the hospitalized cases are even the result of salmonella toxicity?  The processes involved to isolate a pathogen are time, labor, and financially intensive.  Most cases of infectious disease are treated with broad-spectrum antibiotics.  Salmonella is so widespread in the environment that anyone with low resistance—as from poor nutrition, bad sanitation, antibiotic use (which reduces normal, protective flora), or pre-existing illness–might be susceptible.

If the CDC is truly interested in public health, it might do more to educate the public about the broader aspects of health, instead of pushing the panic button over speculative claims and unverified reports.

In my eleven years of hugging and kissing my chickens—they are very affectionate—I have developed some health problems, but salmonella has never been one of them.  I have minor scars on both arms from being scratched, but the worst is the deformed left wrist, which I broke when I fell chasing the fox that was chasing my Squire.

When I picked Squire up with my dangling left wrist, it was the sweetest, most healing hug I’ve ever experienced.  I didn’t stop to clean the mud off my arm, and neither the “health care professional” who wrapped it, nor the one who set it in a cast, bothered to clean it , either.

This is the institutionalized version of “health care” today.