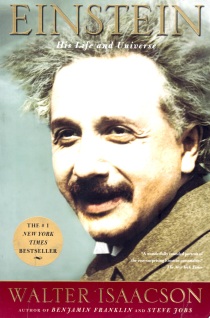 It’s impossible to know what might have been.  It’s just as impossible to know what lies ahead.  I just finished reading a biography of Albert Einstein (Einstein: His Life and Universe, Walter Isaacson, 2007).  It struck me that Einstein wanted to believe in a universe that could be predicted, if only we knew the hidden laws.  He thus believed in predestination, insisting that “God doesn’t play dice with the universe.”  He wanted to believe in strict cause and effect.

In this regard, Einstein ran up against, and spent the latter part of his life, trying to refute the implications of his own 1905 paper on the “photoelectric effect” which won the Nobel Prize in 1922.  He relied on the work of Max Planck, who in 1900 had come up with an equation that described the curve of radiation wavelengths at each temperature.  This required the use of a constant (now called Planck’s constant) that accounted for the sudden shift in wavelengths of light emitted by metal at different temperatures.  Planck believed these “quanta” were not properties of the light itself, but of the interaction between matter and light.  It was Einstein who suggested these “quanta” were properties of the light itself.  Thus he and Planck laid the foundations for quantum mechanics, but neither was comfortable with the fact that their ideas undermined the Newtonian concepts of strict causality and certainty they cherished.

Based on these beginnings, the rising physicists of “quantum mechanics,” like Neils Bohr and Werner Heisenberg, recognizing that light demonstrated the dualistic qualities of particles or waves, refuted age old ideas of an objective reality, existing apart from the observer.  They began to think in terms of probabilities.  Heisenberg developed his “uncertainty principle” in 1927.  This asserted that it is impossible to know the exact position and momentum of a particle, such as an electron, at the same time.  Knowing the precise location precludes certain knowledge of the momentum, and vice versa.

Quantum mechanics expanded the world of physics far beyond Isaac Newton’s absolute, objective universe, based on observable laws. But throughout his life, Albert Einstein resisted the vagueness of non-absolutes, even though he made his own contributions to quantum physics.  Einstein’s stubborn desire for predictability, which is the ostensible goal of science, for some people, could not adapt to the uncertainty of probabilities.  As another early quantum physicist, Erwin Schrodinger, might explain, the wave function of probabilities exists until an actual event is observed, at which point the probability wave collapses and the probability of the event’s occurrence becomes 100%.  Linked with this is the idea that the observer cannot be objective but must be considered a participant in the event. 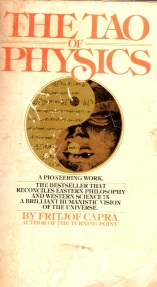 That the observer necessarily affects the experiment is an integral component of quantum physics, but the principle has more general implications, too.  Books like The Tao of Physics (Fritjof Capra, 1975), or The Dancing Wu Li Masters (Gary Zukav, 1979), describe how modern physics parallels the beliefs of Oriental mystics.  As noted in The Dancing Wu Li Masters, the Chinese term for “physics” is “wu li,” which means “patterns of organic energy.”  This relates to the pervasive quality of “qi,” sometimes described as “life force,” or “vital energy,” which is said to pervade the cosmos, including all matter and non-matter.  The idea of ‘qi” is ignored in Western thinking, as if life exists apart from science or medicine. 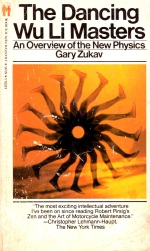 Western science presumes to disconnect life from the mechanical universe we imagine, but this is a relatively modern development.  Astronomy grew out of astrology and chemistry grew from alchemy, ancient belief systems that gave life to the heavens and to earthly minerals.  The search for cosmic laws or the language of the gods is as old as man’s awareness of the sun, moon, the planets and constellations, and their mysterious cycles.  All these have been used to make predictions.  The seer, the fortune teller, the prognosticator–these are as powerful as ever.  Modern superstition confers blessings on the predictors of weather, stock market, politics, or football games, as well as on the climate changers and the Apocalyptic soothsayers of the twenty-first century.

From a quantum mechanics point of view, however, it might be said that nothing can be predicted with certainty.  We only can assess probabilities and can’t know all the contingencies that affect events.  There is no objective reality, no ultimate outcome, no absolute end-point.  Time is endless.  There is only process, and no one knows where it will lead.  The possibilities are infinite.