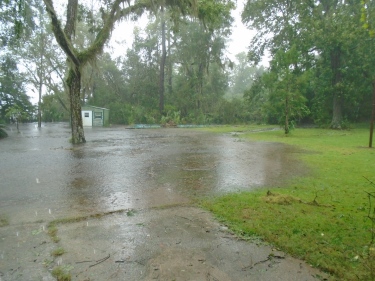 Climate change?  Does it matter?   The storm surge from Hurricane Irma flooded my crawl space, water heater, and outside air conditioner, and I’m still cleaning up the debris.  kco091117

I feel overwhelmed by the glut of demands on attention and allegiance.  What to believe?  What not to believe?   To believe everything and nothing at the same time?  To trust my own judgment or to doubt?  I long for escape, to screen it all out, to hear only the sounds of birds and wind through the trees, to see only the clouds floating by or the filigree of Spanish moss.  Nature speaks her own language, full of mystery, but without hypocrisy.

Consensual science says the climate is changing, and it’s man’s fault.  “Climate deniers,” some with the same education and backgrounds, say the whole idea is a hoax.

The public and the media seem obsessed with the president of the United States, as if he alone has the power to bring on the Apocalypse.

I look at my immediate, media-avoidant home and see the reality of today’s chores awaiting me. The frenzy that has gripped the world in fear of terrorism, Congressional bickering, North Korea, “climate change,” the latest hurricane, and what gaffe the “Orange Tweet” has committed now. . . all seem far away, surreal, and not my concern.

The word “science” comes from the Latin, “sciere,” “to know,”  but I contend knowledge is forever evolving and changing, based on new data, new perspectives. Lately, I’ve had to accept that much of what I thought I knew no longer applies.  Not only that, I’ve found those who speak with the most authority often believe they know more than they do.  Are they lying?  Not if they believe they know.  Who knows?

They say “knowledge is power.”  I’ve found knowledge also brings the responsibility for decisions about what to do with it.  Each action or non-action leads to unforeseen probabilities.  We can never know the paths not taken.

Lately, I’ve had to question everything I’ve been taught, especially within the field of medicine, but also regarding history and politics.  While they may seem to be different areas of concern, they have merged as two inextricably linked paradigms regarding the human body and mind, as they relate to the greater social family of humanity.

I feel a greater need to understand than to know.  To understand is eventually to love, according to one of my favorite philosophers.  To believe I “know” is an exercise in hubris, maybe, and this is where official “science” and I part ways.  How do you know you know?

Maybe I’m psychic.  Maybe I’m psychotic.  Maybe there’s no difference, from an internal perspective.  I’ve always relied on what I call a “vibrational perception” that tries to attune to “energy fields” of emotion:  the frenetic human angst in the city, the mood of a room, the quality of the sounds in the atmosphere, the body language of someone I’ve unwittingly offended.  I feel things I can’t verify.  I dream of things—usually minor things—before they happen.  I believe I live many lives, not in a sequential way, but in a group of parallel lives in a “spacious present” where “bleed throughs” regularly occur.  I believe time is an illusion, so we are all essentially immortal, thrust together in multiple contexts until we figure out how to get along.  I believe ghosts talk to me, although I’ve never seen one.  I feel them in my “vibe space.”  They like to mess with me.

I can’t “prove” any of this, nor do I care to try. Maybe it’s imagination, but imagination gives things their own validity. I still have a physical body in the physical world we breathing human beings agree exists, the “reality” that depends on physical senses for information.

I contend there is no objective reality, that we are all subjective, with unique perspectives, experiences, orientations.  I believe life is universal and provides the energy of the cosmos.  Some people call it god.  Some call it “qi.”  Some may not think of it at all.

I read today that many people feel a strong need to be “right.”  They screen out conflicting evidence and dig their heels into defending ossified conclusions.  That was my father’s way.  He was a proud “rational scientist,” scornful of the “emotional irrationality” of women, generally, and my mother, specifically.  To be wrong around him was a character flaw, never to be lived down, so it became an exercise in pride never to admit error.  Ghosts don’t exist, he claimed, until he became one, witnessed by a friend of science, after he died.

So who really knows?  Maybe we’re in the throes of a massive paradigm shift, in which the desire to understand begins to surpass the futile attempt to know.  I don’t believe the future is fixed or predictable.  There are many probable futures, I hope, but the present is a good place to start.