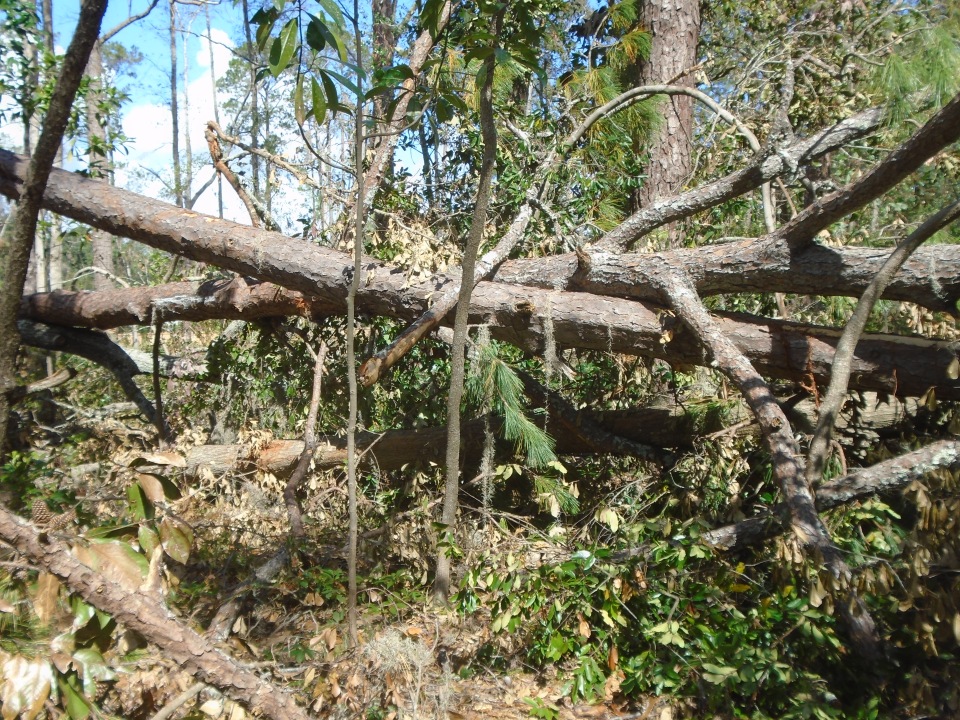 When disaster strikes on the home front, world events and political wrangling fade into a surreal background.  Hurricane Matthew knocked out electrical power in 90% of Chatham County, with power lines down on the streets, flooding in low-lying areas, and people like me stranded behind  fallen trees.

Eight huge trees fell across our driveway, with branches so thick that the road wasn’t passable even on foot.  It took two and a half days for us to clear trunks and branches from the road so we could get out by car.  It took another five days for power (and in my case, water) to be restored.  My brother-in-law was so desperate for his television fix that he hooked his car battery to an inverter and the TV so he could watch the presidential debates.

The storm hit Saturday morning (October 8) around 5 a.m.  I had spent the Wednesday prior in the hospital emergency room with a hypertensive crisis, with blood pressure in the stroke range.  I’d been having headaches and was beginning to lose my eyesight.  The doctors wanted to admit me, but I negotiated my way out of it, claiming that there was no one to take care of my animals, and the storm was coming.  “If I have to die, I’d rather die at home than in the hospital,” I said.  The docs begrudgingly discharged me with blood pressure medicines and a follow-up visit after the storm.

So I ended up playing lumberjack three days later, grateful that my body is still in good enough shape to take care of necessities.  Because of the power outage, my stricken eyesight and blocked roads, I was isolated from all stimuli outside my immediate environment, the sounds of chain saws throughout the neighborhood and the unhurried and unchanged sounds of nature.  I did what I could, using stored water for washing dishes (gas stove, fortunately), emptying the refrigerator of food before it went bad, cleaning, sweeping.  meditating.

The outside world seemed unreal, a dream.  I had decided the hypertension came from becoming overly involved in world events, caring too much for things I can’t control or even influence.  The body is known to generate the same stress hormones when faced with close and real as well as artificial (like TV news) danger.

I decided the hate and fear mongering perpetuated by the media creates a chronic state of mass arousal and over-stimulation that grows on itself.  This energy has nowhere to go, except to wear down the body and sap its vitality.

As a symbolic thinker, I believe everything that happens has significance beyond what is immediately apparent.  That my fate is connected to the world’s fate puts my body in the cross-currents between inner and outer, a tree splintered by the winds of forces beyond my understanding or control.  That I choose not to see what’s happening is my purely human physical reaction to the clashes of Armageddon at my doorstep.