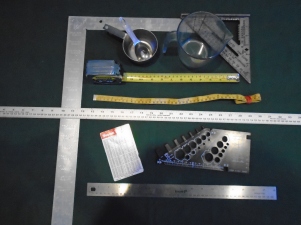 I put myself on the metric system years ago, using it for everything from sewing to woodworking. It’s especially useful for calculating gas:oil ratios for my various power tools.  My chain saw fuel tank holds about a cup, and the required ratio of gas to oil is 50:1. To avoid mixing more than necessary for the job at hand, I have in the past gone through rigorous calculations to reduce gallon:ounce to cup:teaspoon sizes.  This takes a master mathematician, unless you know that a cup is almost exactly 250 milliliters, and a teaspoon is almost exactly 5 ml, good enough for my chain saw’s 50:1 requirement.

The framers of our Constitution realized the economic importance of having a consistent system of weights and measures. Article 1, Section 8 gives Congress the power “To coin Money, regulate the Value thereof, and of foreign Coin, and fix the Standard of Weights and Measures,” all in the same sentence.  In the beginning, it was a political issue.  Thomas Jefferson argued for a decimal-based system, while Alexander Hamilton preferred the British “inch-pound” one.  Jefferson won in the money category, which is why we have a decimal-based dollar.  As he explained, the British system of fractions “works for bankers, but not for farmers.”

In 1975, the US Congress passed the “Metric Conversion Act,” which recommended but did not mandate that the US switch to the System Internationale d’Unite´s, commonly known as the “metric” or “SI” system. In 1988 it made the SI system the “preferred” system.

However, the US has been slow to convert. It is now the only country in the world that still uses the old “inch-pound” system, based on the British standard used in the 1700’s.  Even Britain began converting to metric in 1965.  New Zealand began conversion in 1969, Australia in 1970, and Canada in 1975.

We now see a blend of the inch-pound and metric system on grocery items, with weights and liquid measures given in both. We have yet to see many tools with metric measurements.  Rulers, measuring tapes, squares, hardware, and other items in metric are hard to come by.

That the US is out of phase with the rest of the world is nowhere more obvious than in our stubborn adherence to the antiquated inch-pound system. The costs are incalculable, as the “global economy” must adapt to our standards to sell products here.  Modern machines contain parts from all over the world, with both measurement systems applied in many large ones, like cars.

Metric is easy. Conversion back and forth is hard and error-prone, responsible for at least one satellite explosion so far.  Convenience is a major feature of the SI system.  It is based on one family of units.  It relies on decimals rather than fractions.  It employs standard prefixes, and different quantities relate to each other in a simple way.

The inch-pound system, by contrast, is based on a combination of units developed separately, with some, like the mile, coming from the Roman Empire. It derives from “mille passus”, Latin for “thousand paces.”  The foot was established from the length of King Henry VIII’s feet.  His daughter Elizabeth I, in the 1500’s, set the mile as 5280 feet, or eight furlongs.  A furlong was the length of a furrow an ox could plow without resting.  The inch was gauged to be three barley corns, laid end to end.

In the 1600’s there was no universal standard, which became inconvenient for merchants involved in trade with different regions. In 1790, the Parliament of France took action, and in 1795 it officially adopted the SI system.  It established the meter as one ten-millionth of the distance from the North Pole to the equator.  A gram was one cubic centimeter of water at a specified temperature, and the centigrade scale spanned from the freezing to the boiling point of water.  Thus, the meter tied length, area, volume (capacity), and mass together.

The complexity of weights and measures shows in the SI’s “base units” for different types of measurements. The meter is the base unit of length; the kilogram of mass; the second measures time; the Kelvin is for temperature, using the same unit-span as Celsius but having a different start-point (absolute zero, or -273.15 degrees centigrade).  The ampere is for electric current; the candela for light brightness; and the mole for substance.  One liter of water has a volume of 1000 cubic centimeters (or cubic milliliters) and a mass of one kilogram.  “Horsepower” is the inch-pound equivalent of watts, with 750 watts equal to one horsepower.

Despite our general reluctance to keep pace with the rest of the world, metrically speaking, we are moving that way in subtle fashion. Anyone who has measured a standard two-by-four—a piece of lumber used in framing houses, among other things—knows it is not two inches by four inches.  It is one-and-a-half inches by three-and-a-half inches.  But if you measure with a metric ruler, you will find it is exactly 4 centimeters by 9 centimeters. 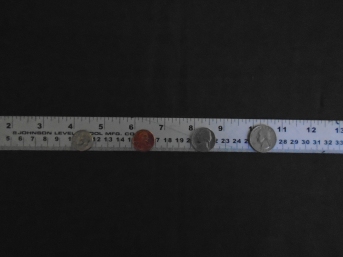 An even better example of “metric creep” shows in the four major coins we use, the dime, penny, nickel, and quarter. Measure with a metric ruler, and you will find there is a consistent progression in diameter.  A dime is exactly 1.8 centimeters, a penny 2.0 cm, a nickel 2.2 cm, and a quarter 2.4 cm, each 0.2 cm larger than the one before.

In this election year, I would like to see candidates for all offices move toward practical, easily attainable goals that benefit everyone. Officially adopting the metric scale would be a start.  Abolishing Daylight Savings Time would be nice, too, as it costs way more than it’s worth, for many of us.  In future blogs, I plan to make a case for repealing a number of mandates, primarily the ethanol mandate.  I could make a strong case for repealing the air bag mandate.  Finally, the incandescent light bulb needs to make a come-back, at least until someone finds a better way to heat chicken coops in winter.