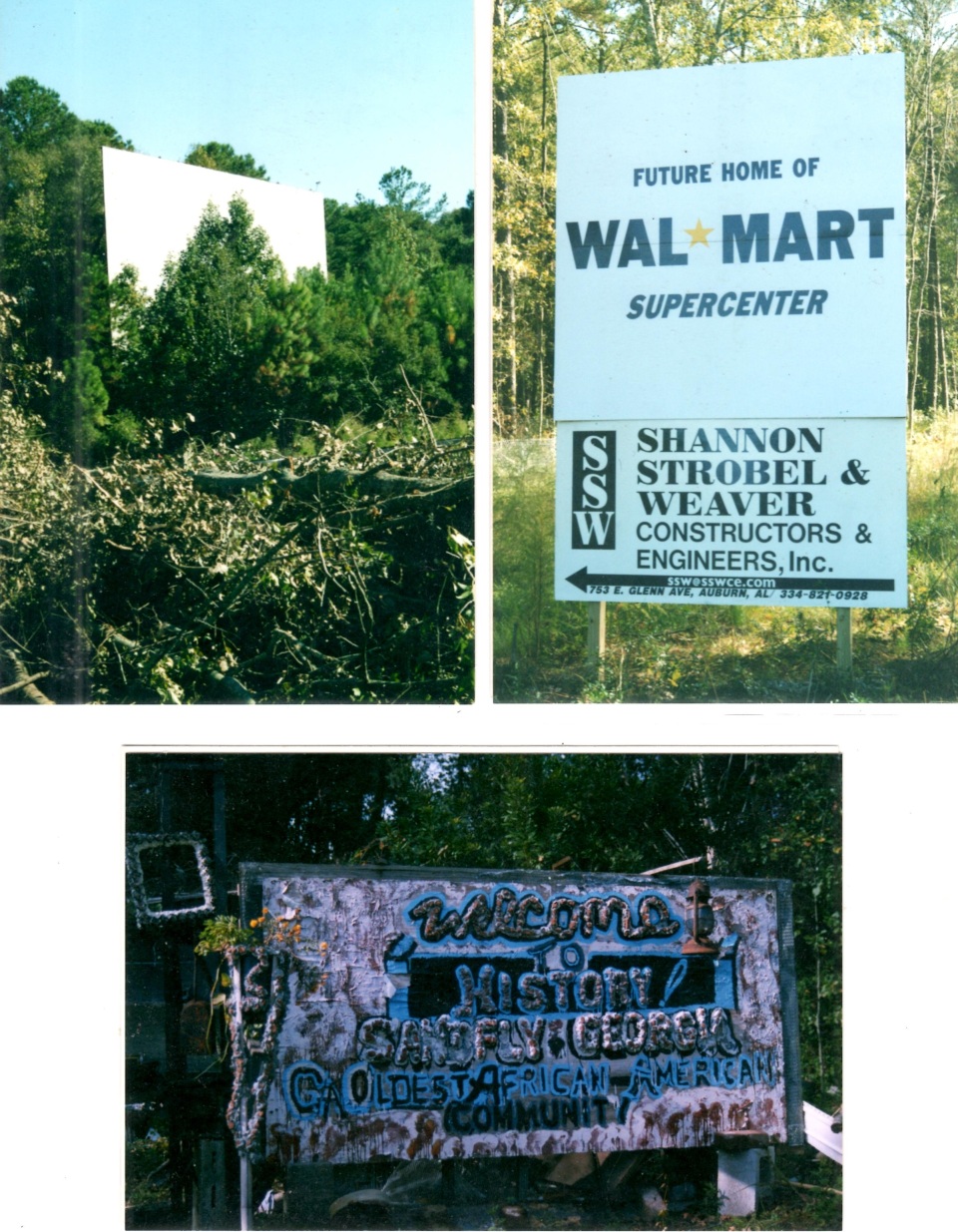 I took the above photographs in November, 2003, as Walmart moved in on Sandfly, a 200-year old black community that had already lost housing by eminent domain for the Truman Parkway.  The parkway is a SPLOST-funded north-south highway the length of the city, from the Savannah River to International Paper’s gated real estate development on Skidaway Island.  Sandfly was in the way, as was the first air-conditioned drive-in theater in the world, discontinued long ago.  Walmart breezed through Chatham County’s approval process with the collusion of all the real estate developers on the Metropolitan Planning Commission as well as the Chatham County Commissioners.  The process was engineered by the county attorney, who struck panic in the ruling elite by claiming Walmart threatened to sue if denied.

Now, the same county attorney has been given authority by the County Commission to conduct negotiations in secret to eminent domain other parcels for road (and possibly other) improvements, with payment by SPLOST.  At the top of the eminent domain list is Speedwall United Methodist Church, in Sandfly, where the major Walmart opposition held its meetings.  The tax collectors want to replace the church with a roundabout, a totally unnecessary waste of taxpayer money and yet another kick in the groin to Sandfly.

Coincidence?  Let’s just say that Chatham and probably other counties have used the twin weapons of eminent domain and SPLOST since 2005 to run roughshod over the community, primarily the disenfranchised black community, using the power to seize property under any pretext (such as “blighted neighborhood”) and to provide government contracts to insiders to build buildings and roadways funded by SPLOST.  The practice is so entrenched that people have come to believe this is normal.

Probably the best way to stop the bulldozing of middle America is to defeat SPLOST, locally, as well as in other communities that have been conned into this sales-tax add-on.

I wrote the following vignette in November, 2007, after the new Walmart was opened and operational.

I stormed the Walmart bastion at 2 a.m., after machine noise from its street sweeper woke me up, one-half mile away.  I started in the parking lot with the machine’s sweet-looking operator, then spoke with the “Securitas” driver.  She sat with lights flashing while I took pictures of her and the poor little black man who runs the street sweeper and was just doing his job. Then I went inside and accosted Arthur, the assistant manager, who has no last name.  I told off the cashiers and the lone customer inside the store, amidst the acres of Walmart’s trash on the shelves.

“If you didn’t sell so much cheap plastic junk encased in too much packaging,” I suggested, “you wouldn’t have so much litter in the parking lot.”  I didn’t tell him how vigorously I campaigned against this monstrosity of a spot-zone, and it’s not too late to shut it down, if I can’t sleep.

Poor Arthur just looked at me and claimed he didn’t hear the noise.  I should have said that’s because the machine noise inside the store is even louder.  I could have said you get paid to listen to it, but I don’t.  In fact, as a taxpayer and disgruntled neighbor, I pay multiple times to listen to that noise.  Is deafness a job requirement here?

My only cost was the gas and time. A good time was had by all.  Even Arthur had a chance to show how he could be of service.  I told him on the way out – he wanted to hear for himself – that Walmart was exporting money out of town as fast as possible, it was spot-zoned, etc.  I said I’m ready to shut the place down.  Next time, maybe I’ll call the head of the Chatham County Commission at home, so he can hear the noise, too.

Now I wonder why Arthur took me outside, as if he didn’t know what a street sweeper sounds like.  Of course the sweeper was quiet, since I had put the fear of the Lord in the driver before storming Walmart’s inner sanctum

A small audience sat outside the entrance, presumably off-duty employees waiting for the bus.  As Arthur and I stood there, listening to the blessed new silence, I told him I should not be here.  I should be sleeping.

I turned to leave, saying “Good night, everybody,” over my shoulder. I stalked to the car, parked in a handicapped spot in the vast parking lot, empty but for litter, security, the street sweeper, and one or two stragglers.

Actually, we had 2 a.m. twice that night, because we went off Daylight Savings Time. I probably confronted Walmart’s attitude between 2 a.m. and 2 a.m. The clock in the car said something like 2:40 when I drove home.  I relate machine noise to Shape Shifting Alien Reptile vibe sucking. According to author David Icke in Tales from the Time Loop, the Shape Shifting Alien Reptiles (SSARs)  sap human psychic energy and funnel it to their home dimension between the spaces of physical reality.

The fact that I chose the window between the 2 a.m.’s to attack the SSARs in their own dimension is a story for science fiction. I wonder if this has cosmic significance. Of course it does, if I believe it.  The people I met seemed almost grateful to have me raise a stink.  The battlefield has been quiet ever since.

You want entertainment?  Turn off the TV.  Life is in the now.

10 thoughts on “Walmart Sweeps Up”